My adventures began in Marrakesh at midnight because I had to take a late flight from Madrid. Well it wasn’t my brightest idea, because finding my hotel was a challenge. Worrying, however, was not an option, nor a habit, as adventures seem to swarm around me for some reason, and where once I had swatted them like flies and mosquitoes, now they are welcome to frolic around like butterflies.  The action started immediately after passing the airport doors, with taxi drivers greeting me with irresistible offers, made special for a tourist: a fare three times the usual price. The spontaneous inflation of taxi fares however, had to be equally matched by my negotiation and haggling skills, and they sure did, however only half of the price offered could be achieved. After finally getting to the city, the search for the hotel was not relieved by my navigation system. Even the almighty eye of Google with its catalogue of maps showed me wrong places a couple of times. Surprisingly, only the local beggars and drug dealers (yes some of Moroccan youth tried offering me hashish, that’s how they earned their living) could help me find my destination.

The first thing that really shocked me the most, however, was the absence of hygiene in the streets of Marrakesh; most people seemed messy. Be careful with what you eat, because there were some cases with deceptively looking food. You can also be shocked by poor children, for whom textbooks, pencils and classes are replaced by playing in rubbish and begging for money. Many naïve and unsuspecting tourists might also fall prey to pickpockets while being dazzled by the red streets of the capital. Punctuality is also an option, especially with public transport. Worrying, however, is not recommended. On the contrary, my advice to you is to relax and go along with the rhythm of Morocco’s heart.

Whereas Morocco might seem to struggle with poverty, and in a way, it is, one should seek the riches within. Morocco is wealthy with history, architecture protected by UNESCO for future generations.  Morocco, full of tradition, will make you feel as if you moved back several centuries into the past. Morocco’s wealth may also be counted in nature, as Allah has blessed this land with everything: a single bus trip can take you to chilly, graceful, snow-covered mountains; hot and sublime desert with its gold sands, cool, calm emerald forests and the breezy saphire sea. The night in the desert however, was unforgettable, as when the night fell, the indigo sky finally showed us its jewels.  Traditional diner with music and Moroccan dances make for a one of a kind atmosphere. Talking about food, you simply have to try the Tagine and Couscous with traditional Moroccan sweet bread (which is really tasty!!!). Prices in Morocco are really low compared to Europe: hotels, 3 day tours to the desert, souvenirs, food, public transport and taxi- all sums up to around 230eur per 7 days (plane tickets is not included). In Morocco the most popular languages are Arabic, Berber and French because in the past Morocco was a French colony, so if you are English speaker in not touristic places will not have as much fun.

Friends, be ready for adventures, turn on your chill mood and enjoy your journey.

Me and cityscape to Fez 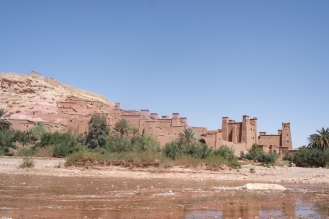 Student who travels the world

Life Lessons on the Importance of Slow